Dragon Fantasy coming to the 3DS

We've talked about this a few times now but it's time to make it official. The original Dragon Fantasy game (occassionally known as Dragon Fantasy Book I) is coming to the Nintendo 3DS eShop!

We're in the final testing phases before submission and cannot wait to get this out and in your hands. Why, you ask?

Because we took every major request we've heard to date, and put them in the game!

Quest log? Check.
In-game map? Check.
Removing the random battles? Check. (Mostly*)
Purchasing of multiple items at once? Check.
Bestiary to track what and how many I've defeated? Check.
Improved inventory system with sorting and filtering? Check.
Ability for Ogden to gain some allies, so he doesn't have to grind all by his lonesome? Check.

When travelling on the world map, battles are still random. Any time you're in towns, caves, dungeons, or caverns they're not. We felt these were the times when random battles were the most offensive, because they deterred exploring. Many people (ourselves included) would try to quickly find the exit to move on instead of turning back to fully explore a dungeon because the cost of getting lost was some unknown number of random battles.

Instead, the monsters are scattered around the map. When you take a step, they take a step. It turns what used to be frustrating adventuring into a game of cat and mouse, where you can trap the monsters to destroy them, or carefully avoid them. 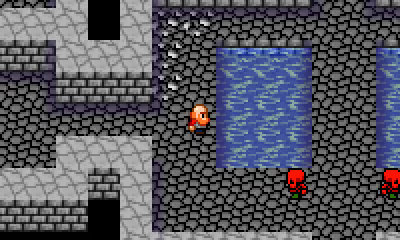 Tell me more, you say.

Why, it'd be my pleasure.

First, we had this problem of a second screen to deal with. So we started like everyone does: with a map.

That didn't seem like quite enough, so we moved the menus to the bottom screen, and even retro-fitted a number of the advancements from Dragon Fantasy Book II, such as the enhanced Inventory system, and the Quest Log.

But that wasn't enough, so we wanted to add more. It's my pleasure to introduce you to our new Beastiary.

We wanted to stay true to the original game, which means we didn't get too crazy here. But that doesn't mean we didn't have a little fun:

The world is displayed in full, fake-SNES, faux-mode-7 glory. In 3D!
Entering battle? The world pulls back as the battle takes its place front and center.

These are unfortunately something you'll just have to see for yourself when playing the game. It turns out these computer things don't show 3D so well.

So there you have it.

Dragon Fantasy Book I.
Coming to the Nintendo 3DS.
All new features, becaused our fans asked, and we listen.